And the crime spree contd....

So Nate was a lot more calm about the whole thing. I on the other hand was freaking out and locking all the doors in the house and scared to be alone and all sorts of silliness. What he didn't say was that they couldn't get into our car so they took the car 2 down from us. And then 3 days ago, I was at home in my garden, :), and this guy who live across the walk from us had the sheriff out in our parking area telling her that someone had stolen his motorcycle!! Ah! And then today in our parking lot Nate saw the sheriff talking to someone else!!! What is wrong with this city?!!
Posted by Natchel at 8:25 PM 2 comments:

What are we, Savages? 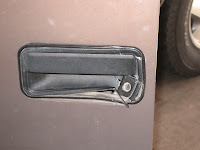 So last saturday, between 3 - 11 am, someone broke into our car.  They forced entry through the driver side front door, and tried to take the Yukon.  Apparently there has been a lot of crime in the area where we live.  An Episcopalian church in the area was broken into, car thefts have been occurring frequently.  This is not the friendliest neighborhood anymore.
They ripped off the sleeve around the steering column and tried to force the ignition system.  Fortunately they did it wrong, and the car wouldn't start.  Unfortunately, he also made it so that the car wouldn't start.  So I've been trying to arrange for a locksmith to come and force start it so that I can get it moved away from the high risk parking lot. 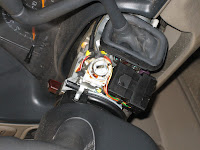 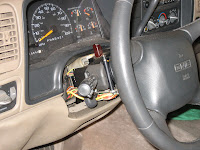 This weekend, we were up at Nates parents house to help out in the new family Bee business. We had to make hives and it was hard work. The garage turned into a workshop and everyone was covered in sawdust! But we finally got it done. Yay! His mom and I took a little break to work on Easter eggs too. They turned out really cute! 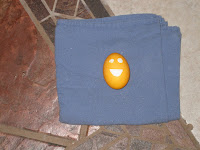 I made this smiley face one! 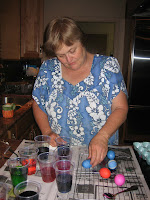 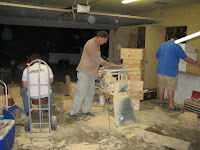 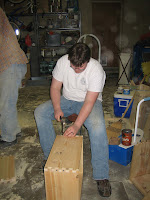 A couple days ago, Nate's cousin Dallin and his wife Kamber were in town and came over to visit. We played Dread Pirate and they really got into it! It was so much fun seeing them and they are a really cute couple. 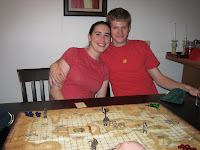 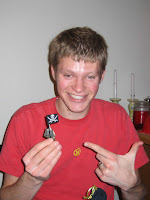 Dallin tried for the whole game
to be the dread pirate 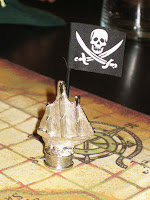 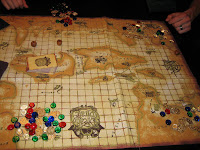 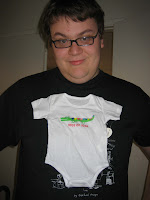 We bought this onesie as a present but I thought it looked so cute on Nate.... :)
Posted by Natchel at 4:42 PM 2 comments:

How does your garden grow? 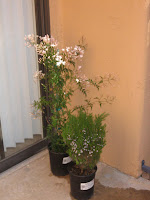 I was so excited to move into a place with a front patio so I can have a little garden! It started with two potted cacti (such a funny word!), and then I bought a mini Mandarin tree and then Nate got me two pots for Valentines day that I haven't used yet because I don't have any seeds. Then I bought a pink jasmine, a breath of heaven (doesn't that sound very romantic? I thought so and it was cute, so I got it.) Then I got tomato seeds and planted them too! I'm so proud of my plants, I go out every day to check on them and I'm trying not to over water because I have been known to do that! 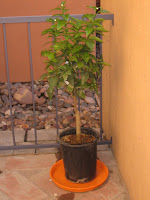 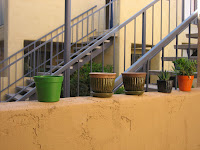 News flash! We have friends in Tucson! Nate and I have a running joke that whenever we are in a new place, he always says to me "Ok now go make us friends!" and we laugh because it never really happens. But someone from the ward will be nice to us and we get all excited and say "We made friends!" But this week, we actually did!!
Thursday we went over to our friends Jay and Maranda's house to play a board/card/strategy game called Marvel Heros. Yes, a grownups comic book game. SO complicated and it took 4 HOURS. But the boys (Nate, his brother Daniel and Jay) had so much fun. Maranda and I kind of gave up in the end and just chatted. The boys got a little frustrated whenever it was our turn, but we were having too much fun talking!

Thursday's fun was followed by Friday night, when we went to some more friend's place and played games.  Savannah is my Visiting Teacher, and she was banking in Nate's branch Friday and she invited us over. We played Killer Bunnies with her and her husband Todd.  It was crazy, we played two whole games of Killer Bunnies in twenty minutes!  Afterwards, we played Scum, or as I know it The Great Dalmudi.  It was a lot of fun.
Saturday we had a ward picnic at Ft. Lowell Park.  Nate had a blast playing Three Flies up with some guys from the ward while I had a great time watching Jay and Maranda's kids.  We got together with them, and Nate and Bethany Price (some more friends from the ward) and played Marvel Heroes again, and played Super Smash brothers.  Nate had a lot of fun.  It was kind of a boring night for me, but Nate sure had fun.
Today we got a new game we ordered a week ago, called Vikings.  It is a lot like Settlers of Catan, but different game play.  It was really fun, now we are looking for people to play it with. Hint hint! :)
Posted by Natchel at 10:30 PM 2 comments:

So I just wanted to point out to everybody that I have the coolest wife.  She completely tolerates my "nerdiness" and even supports me in it on occasion.  Take this monday for example.  One of my favorite purchases we did with funds from wedding presents was a Nintendo Wii.  Well, there was a new game coming out, Super Smash Brothers, and Rachel knew how badly I wanted it.  I had been saving a Gift Card I had won at work in Idaho for the game to come out so that it wouldn't cost very much, but the first day I could buy the game I forgot the gift card at home.  I had been running late to work and left it on the counter.  So Rachel, awesome wife that she is, went out of her way to buy the game and drop it off at the apartment so that it would be waiting for me when I got home from work.  She even left a little note on it, so I was the happiest guy in the whole state of Arizona when I got home.  She is fantastic!  Basically, when it comes to who has the greatest spouse, I totally win.
The past few days have been fun.  A couple weeks ago Rachel and I went to the temple with my parents and we left Rachel's engagement and wedding ring combo at the jewelers for its semi-annual checkup.  The ring didn't fit quite right to Rachel's liking, so she had some adjustments ordered, and this past Saturday we drove to Phoenix to pick it up.  By so doing we got "volunteered" to help my brother Ben with a photography gig he had arranged.  It was a graduation ceremony for this little tiny university that focuses on medical like professions, but isn't a medical school.  I've never been a big fan of graduation ceremonies anyway, but life gets much much worse when you aren't in the graduating party.  Rachel and Ben were working the cameras, and I was playing Monopoly on my cell phone.  That part of the day ended with Ben taking us to Taco Bell to reward our hard work.  Due to a mix up with the clerks calling the wrong number, we took another customer's food.  I was returning to the store when this big monstrosity of a guy comes walking out towards our car.  I smiled, told him about the mistake, and handed him the food, not thinking much of it.  He let out a string of profanity, flipped off my brother waiting for us...Rachel pointed out we made a mad black guy a madder black guy.
Thats all for us.  Rachel will surely have something to comment on in the next few days!
Posted by Natchel at 10:54 PM No comments:

My best friend in he entire world, Susan, sent my Christmas present to me the other day. I have a red glass star that holds a candle inside of it that I bought last year and I really love it. She found 3 perfectly matching stars to hang from the ceiling! Lovely! She wanted me to put them up so here you go! 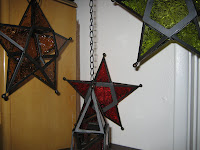 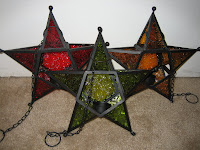 Nate and I wanted to go on a night hike and we got all geared up and drove up to this trail he knew. We walked for about 5 minutes until we came to a river bed that was- shock- filled with water!! In Tucson! Nate said he's never seen water in it before. There was no way to pass so... we turned around and went home. Next time! 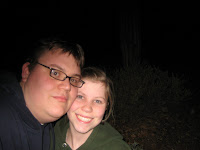 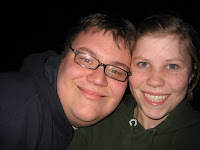