In three days Gabriel will be 6 months. Half a year! I can't believe it. I've already forgotten how it feels to be pregnant and having to go through all the misery and everything. Nate was saying that God makes women forget about all of that so they'll want to have another one. I agree.
So it seems that he exploded through the major milestones in the 5th month.
-He started crawling. Everywhere. He (luckily) hasn't figured out there are stairs in our house but he likes to just crawl around his room or the living room.
-He eats solid foods. He loves food- probably not a great thing but.... He can't get enough. He wants whatever you are eating. He snatched a sucker out of my hand and sucked on it, as I was eating a peach he grabbed my hand and brought it to his mouth and sucked on it, and Nate, unbeknownst to me, gave him a straw of root beer, which he loved. He loves rice cereal, peaches, applesauce, teething toast, anything in a straw, anything from a cup, sweet potatoes, peas, green beans and doesn't like his carrots. He is really good at picking up his puffs and putting them in his mouth and he can go through a whole teething toast. We tried his sippy cup with water in it yesterday and I think it will take some getting used to. He wasn't too crazy about it.
-He sits up by himself and is dang proud of it. He will be cruising along and turn and push himself up and give you a big smile. Something I'm worried about now is that he will crawl over to me while I'm sitting and pull himself up with me and stand up holding onto my shirt. I am definitely not ready for the pulling up/standing milestone yet!!
-He is a techy baby. He loves the tv remote, cell phones and especially the laptop. Anything with buttons. So we bought him a baby toy phone. He doesn't like it. He wants the real deal. 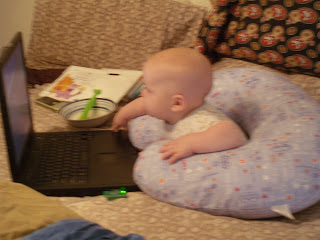 -He love, love, loves his bath! He will splash water to the other side of the bathroom! But only when daddy bathes him.
-He loves big kids. He likes being with his cousins when they play with him or when our friends kids want to play with him. He is so interested by them.
-He loves Nate's glasses. Those things are off Nate's face before he even has time to react.
-He likes toes. Weird but true. He wants to play with my toes or anyones toes he can reach. But don't touch his. He is SO SO ticklish.
The move has wrecked havoc on his mild personality and has brought out the demon baby underneath. He can now throw tantrums and scream the likes of which I have never seen or heard in all of my child care years! But it has also brought out the big boy who is fun to play with now. All in all, he is a really sweet and very serious baby who knows how to have fun every once and a while. And now, for your viewing pleasure: tons of pictures. 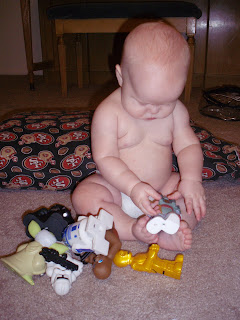 Playing with his Star Wars 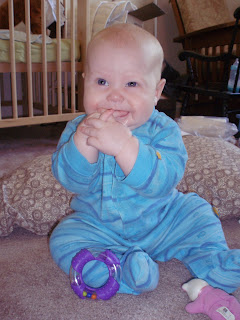 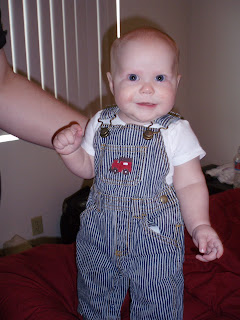 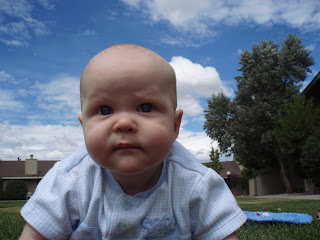 Possibly my favorite picture ever. 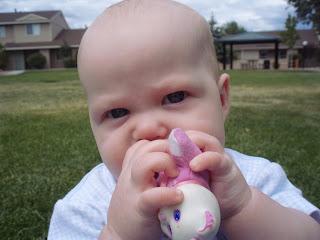 Chewing on his teddy bear 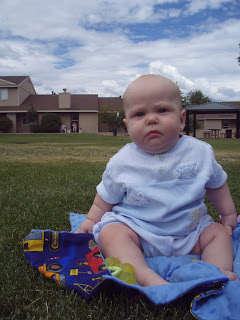 Really does love being outside, even if it doesn't look like it! 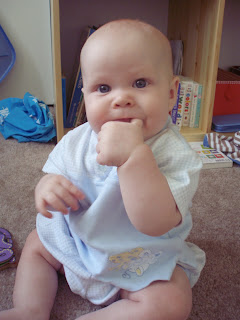 He is DARLING! Wish I could see the real thing before he turns into a big boy. We love babies who eat!

So cute, we can't wait to see him.

Oh my gosh he is growing up so fast! I wish Afton loved to eat. Are you really coming on the 19th? That would be so fun!!

WOW I can't believe how big he is. What a cutie!! We miss you guys!

I can't believe he is crawling already!

So worth the wait! I love him! He is so cute in the videos! I love his laugh! I can't believe how much he can do at only 6 months! He is SUPER baby!

He is just so cute. Love the laugh.

What a cute chubby chub boy! Awww, seeing his darling little face makes me sad you guys are so far away!