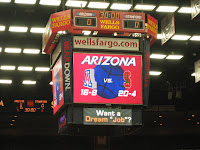 Rachel and I had one heck of a weekend.  My dad won some U of A basketball tickets, so Rachel and I went to the game.  It was kind of cool being there, especially because apparently Wells Fargo has become a major sponsor of the McKale Center.  At one point in the game, all Wells Fargo members were supposed to hold up their debit card and wave them around, and there was a prize for something.  I wasn't enthusiastic enough apparently, this real old lady won.  But the game was real intense.  The U of A played the Stanford Cardinals, who are ranked #7 in the nation.  The game was real close, with Stanford never leading by more than 8 points.  The game came to a last second shot, but Stanford won by one. 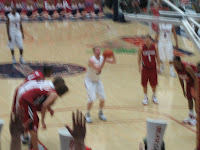 It was our first valentines day together as a married couple and it was sure a lot of fun.  My boss was out of town so all of us snuck out a little earlier than usual (we close at 4, we left at 4:30) and I headed home as fast as I could.  I got home too soon so Rachel made me sit in the bedroom while she finished preparing dinner.  She made some delicious pasta and vegetables and we had a lovely meal.  But the best part was this garlic bread with big hunks of mozzarella cheese.  It was nearly sinful.
This week had several firsts in it.  Rachel started working at a Montessori school, a school that I would never want my child to attend.  She seems to enjoy it, and the children were very excited to see her.  It just serves to confirm the fact that all children love Rachel.
I've begun my real job in earnest now.  That means I opened accounts!  I was so excited.  I opened six products, and felt pretty good about it.  I am starting to think I can do this now, and I'm thrilled to be producing.
I think thats all for us now.
Posted by Natchel at 3:18 PM

Oh, you two! It sounds like you are doing so well down in Arizona- we are excited for you! Although we do miss you and we have been having killer bunny withdrawls because we don't have anyone to play with!

I want the recipe to that practically sinful stuff... it sounded goood! I'm glad you're doing well down there! I hope you're much warmer than we are today!

howdy ya'll. I miss you and hope to see you sometime soon!!