As you'll recall, my eggo was preggo last year, so this was Gabe's first official Halloween, not being a fat fairy... We had a ward trunk or treat on Saturday and Nate got out of work right when it started. Since he wouldn't have time to don a costume, we made his work clothes into a costume by dressing Gabe up the same. Nate had made him his very own Wells Fargo name tag so they were both dressed as bankers. Kind of lame sounding, I know. It's like when my dad said he was a banker every year when I was little and I believed him because he was carrying around the video camera "briefcase". Anyway, they looked really cute together and Gabe had his own little pillow case for his 6 pieces of candy he got. It was a lot of fun, but as we got in the car to leave, I said to Nate that this will probably be a lot more fun when we have more kids and they are a little older, because right now, it just looks like we are two parents exploiting our baby to get candy for ourselves..... which ended up being the case. :) 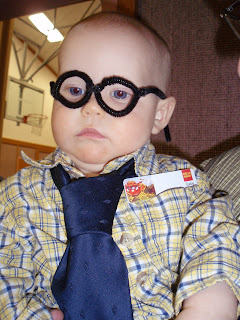 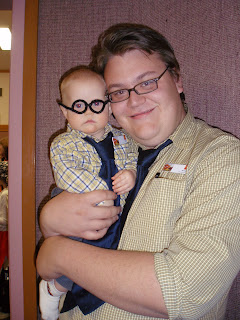 Matching!
Although, Nate pointed out, he looked more like Harry Potter with the pipe cleaner glasses but.... I think people got the idea.
Posted by Natchel at 8:52 AM

Rachel, I really like your short hair. What a fun idea for a costume for Gabe:)

That is a darling idea. Cute pictures.

What a cute idea! Gabe looked thrilled with the glasses. Dad and I dressed up as missionaries! Jajajaja. Love, Mom

ha ha Gabe looks awesome... I dressed Baby D up as merchandise, and I was a shoplifter... Lol... just kidding. I should have tho...

So funny and so clever. I especially love the glasses. What a riot!

All I have to say is...adorable!

Those pipe cleaner glasses are killing me! I LOVE them! He is so cute and it's so sweet that they match!

Such a cute idea!! And I love the pipe cleaner glasses! What a cutie baby!